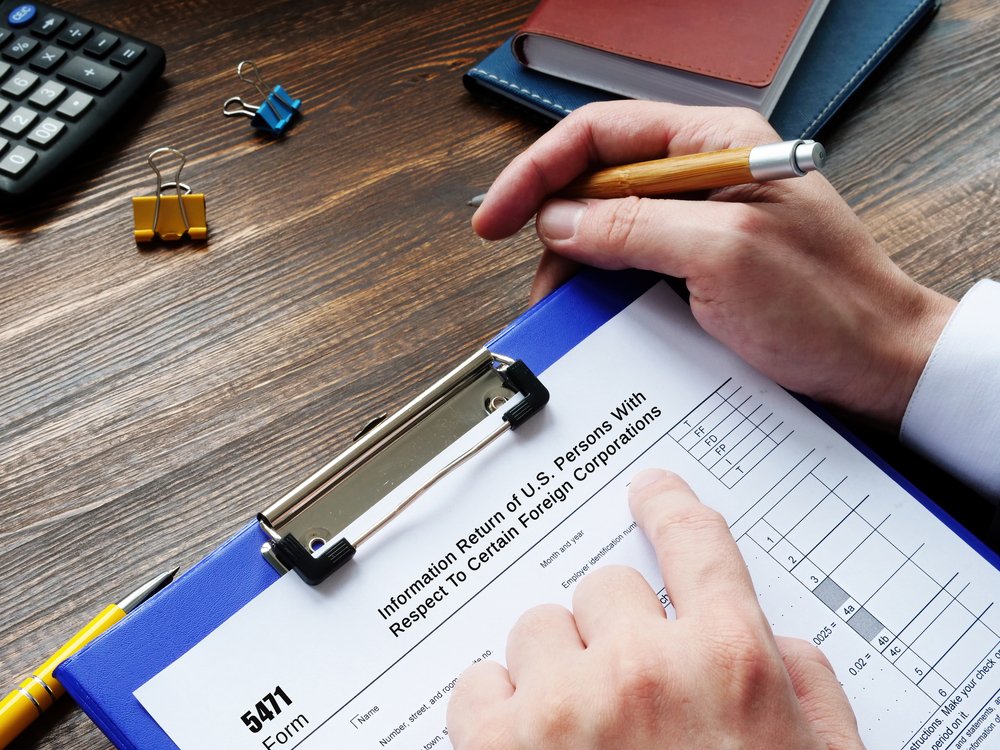 In order to provide the Internal Revenue Service (“IRS”) with the information necessary to ensure compliance with the “global intangible low-taxed income” or “GILTI” and Subpart F income, each year certain U.S. persons must file a Form 5471 with the IRS.
A Form 5471 must be by certain U.S. persons who are officers, directors, or shareholders in respect of certain foreign entities that are classified as corporations for U.S. tax purposes. The Form 5471 and its schedules are used to satisfy the reporting requirements of Internal Revenue Code Sections 6038 and 6046.

The Form 5471 serves as a reporting form to various international provisions of the Internal Revenue Code such as Sections 901/904 (Foreign Tax Credit), 951(a) (Subpart F and Section 956), Section 951A (“GILTI”), Section 965 (“Transition Tax), Section 163(j) (interest deduction limitation), and Section 482 (transfer pricing). The following forms may also need to be filed with a Form 5471 filer: Form 926 (return by a U.S. Transferor of Property to a Foreign Corporation), Form 5713 (Return to report International Boycott Report), Form 8621 (Return to report passive foreign investment company or “PFIC”), Form 8990 (Return to report Limitation on Business Interest Expense), and Forms 1116/1118) (Returns to report individual and corporate foreign tax credits). In addition, a foreign entity reported on Form 5471, depending upon the U.S. related activity of that entity, if any, may be required to file the Form 1120F (U.S. Income Tax Return of a Foreign Corporation). Finally, an individual who is a dual-resident taxpayer and relies upon the residency provision of an income tax treaty to avoid U.S. income tax residency by filing a Form 8833, is still a U.S. resident for purposes of having to file a Form 5471.

The IRS may assess civil and/or criminal penalties for failure to comply with the international informational return filing requirements of Sections 6038 and 6046. The civil penalty for failing to file, or for delinquent, incomplete or materially incorrect filing of a Form 5471 is a reduction of foreign tax credits by ten percent. Further, Internal Revenue Code Section 6038 imposes a flat penalty of $10,000 per tax year for which failure exists, with additional $10,000 penalties accruing (ninety days after notification of failure by the IRS) every thirty days thereafter to a $60,000 maximum. A 40 percent penalty may also be imposed under Section 6662(j) for undisclosed foreign financial asset understatements of tax liability. The IRS generally has three years from when the Form 5471 is filed to assess penalties.

The Form 5471 consists of a number of schedules such as Schedule J, E, M, P, R, and Q. Whether or not a filer of a Form 5471 is required to complete a specific schedule depends on a category of filer can be classified. Currently, there are five general categories of filers. They are:

Category 2- A Category 2 filer is a U.S. citizen or resident who is an offer or director of a foreign corporation in which there has been a change in substantial U.S. ownership- even if the change relates to stock owned by a U.S. person who is not an officer or director. A substantial change in U.S. ownership is when any U.S. person acquires stock that causes him or her to own a 10 percent block of shares, or acquires an additional 10 percent block of shares of that corporation. In other words, if any U.S. person acquires stock, which, when added to any stock previously owned, causes him or her to own stock meeting the 10% stock ownership requirement, the U.S. officers and directors of that foreign corporation must report.

Category 3- A U.S. person is a Category 3 filer with respect to a foreign corporation for a year if the following is done during the its tax year:

1) Acquires stock in the corporation, which, when added to any stock owned on the acquisition date, meets the Category 2 filer 10 percent stock ownership requirement.

4) Disposes of sufficient stock in the corporation to reduce his or her interest to less than the 10 percent stock ownership requirement.

The constructive ownership rules of Section 318 are applied, with a few modifications, to determine if the U.S. person “controls” the foreign corporation. These constructive ownership rules of Section 318(a) require attribution of stock between certain family members and between corporations, partnerships, trusts and estates, on one hand, and their shareholders, partners or beneficiaries, on the other.

Category 5- A Category 5 filer is as follows: 1) is a U.S. shareholder of a CFC at any time during the CFC’s taxable year; and 2) owns stock of the foreign corporation on the last day in the year in which that corporation is a CFC.

Categories 1 and 5 have been recently expanded to 1a, 1b, 1c, 5a, 5b, and 5c. Below is a discussion regarding these new categories.

Category 1a- A Category 1a filer is a U.S. shareholder who is a Category 1 filer. However, the U.S. person is not defined in 1b or 1c.

1) In applying the family constructive ownership rules in Section 318(a)(1), Section 958(b)(1) provides that stock owned by a nonresident alien individual shareholder will not be attributed to a U.S. shareholder.

2) In applying the entity-to-owner constructive ownership rules in Section 318(a)(2), Section 958(b)(2) provides that if a partnership, estate, trust or corporation owns more than 50 percent of the combined voting power of a corporation, it will be treated as owning all of the voting stock of the corporation.

3) Section 318(a)(2)(C) treats stock owned by a corporation as owned proportionality by its shareholders, but only if the shareholders meet a minimum threshold of stock ownership in the corporation.

4) Section 318(a)(3)(C) requires attribution of stock owned by a partner of a partnership, a beneficiary of a trust or estate or 50-percent-or-more shareholder of a corporation to the partnership, trust, estate or corporation. However, Section 958(b)(4) provided that stock owned by a foreign person (i.e., nonresident alien individual, foreign corporation, foreign partnership or foreign trust or estate) was not attributed to a U.S. person under Section 318(a)(3)(C).

Category 1c filers is for a shareholder that controls a CFC or SFC as a result of the downward attribution rules.

Category 5c Filer- A Category 5c filer is a constructively related shareholder (as defined above for Category 1c purposes).

Introduction to the GILTI Tax Regime

The GILTI regime under Section 951(a) captures a significant amount of income earned by a CFC that is not otherwise treated as Subpart F income. Anyone with a GILTI inclusion should know that the U.S. federal income tax liability associated with GILTI is dramatically different to a U.S. shareholder that is a domestic corporation compared to a U.S. shareholder that is an individual. Individuals are subject to GILTI tax at federal rates of up to 37 percent, plus the 3.8 percent Medicare Tax, plus applicable state and local taxes. Failure to properly plan for GILTI will result in no indirect foreign tax credit being available to offset the income tax liability imposed. With that said, domestic C corporations are typically only subject to tax on GILTI inclusions at a rate of 10.5 percent. In addition, a domestic C corporation may utilize an indirect foreign tax credit of 80 percent of the amount of foreign taxes paid on such GILTI.

Since the GILTI tax liability has become so excessive, individual CFC shareholders often consider planning options such as making a 962 election, 954 election, or placing the CFC stock into a domestic holding company. These remedies often have benefits. However, with these benefits there are some downsides that must be considered before planning is undertaken.

Congress probably intended GILTI to apply only to foreign source income received from low tax countries. The problem is, the way the GILTI provisions were drafted, only corporate shareholders can enjoy a reduced GILTI tax rate. For example, only domestic C corporations can claim a 50 percent deduction provided under Section 250 of the Internal Revenue Code. The Section 250 deduction effectively reduces the current 21 percent federal corporate rate to 10.5 percent on GILTI inclusions. In addition, a domestic C corporation may elect to use a foreign tax credit equal to 80 percent of the foreign taxes paid on GILTI income. As a result, a CFC that pays an effective rate of foreign tax of 13.125 percent or more would pay no additional U.S. federal tax liability on a GILTI inclusion. As discussed above, absent planning, foreign tax credits and Section 250 deduction are not available to individual U.S. shareholders of CFCs. These shareholders are subject to tax on a GILTI inclusion at federal rates of up to 37 percent. (plus a 3.8 percent medicare tax). This is the case even if the CFC incurred a significant tax liability in the source country on earning the tested income.

The definition of Subpart F income has five components. The most important component is “foreign base company income.” The other four components are: 1) income from certain insurance activities defined in Section 953; 2) certain international boycott-related income; 3) certain illegal bribes, kickbacks or other payments to government officials, employees or agents, and 4) income from certain ostracized foreign countries to which Section 901(j) applies.

It is extremely important to work with an international tax specialist to ensure accurate preparation of your Form 5471. Having the wrong professional complete your Form 5471 can result in significant penalties. We have substantial experience advising CFC shareholders of their compliance obligations. We also provide GILTI and Subpart F tax planning. In addition, we have provided assistance to many accounting and law firms (both large and small) in all areas of international taxation.