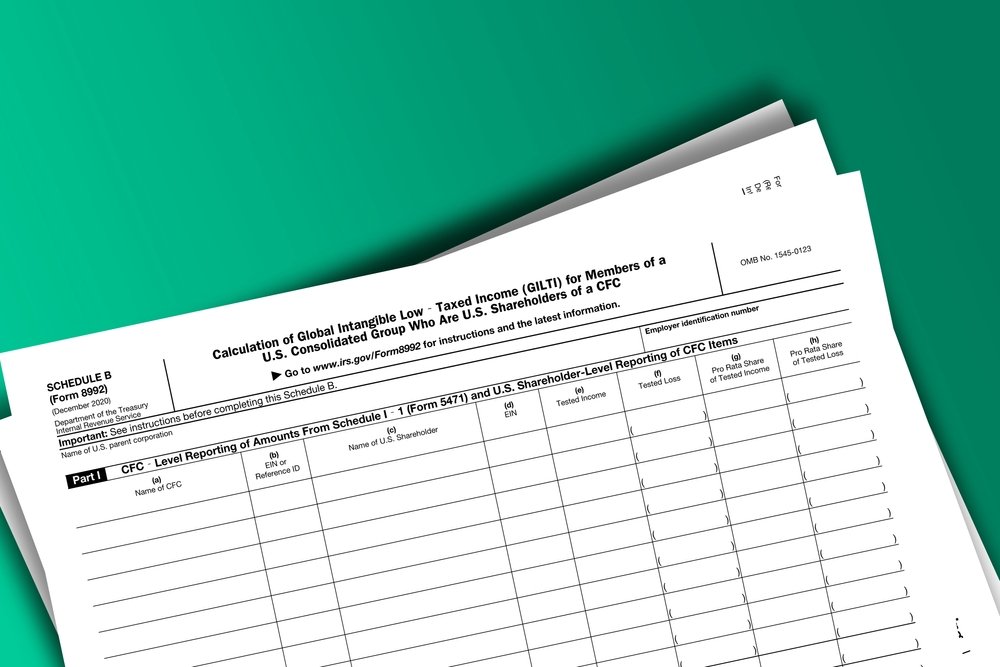 Because the U.S. federal liabilities are so excessive on GILTI inclusions, many individual CFC shareholders have taken an “if you can’t beat them, join them” mentality and have established domestic holding or blocker companies to hold CFC shares to reduce GILTI inclusions. Establishing a domestic holding or blocker company to hold CFC shares has a number of benefits. But with those benefits come some downsides. This article will discuss GILTI planning opportunities associated with transferring CFC shares into a holding company.

As its name suggests, Congress presumably intended that GILTI apply only to income that is subject to a low rate of tax in the source country. Unfortunately, the mechanisms that were created to ensure this result are only applicable to U.S. shareholders that are domestic corporations. That is, a domestic corporation can make a Section 250 deduction equal to 50 percent of the GILTI inclusion. This deduction effectively reduces the current 21 percent federal corporate rate to 10.5 percent on a GILTI inclusion. Second, a domestic C corporation may elect to use a foreign tax credit equal to 80 percent of the foreign taxes paid on GILTI income. This credit effectively ensures that a CFC that pays an effective rate of foreign tax of 13.125 percent or more would pay no additional U.S. federal tax liability on a GILTI inclusion. A 50 percent deduction under Section 250 of the Internal Revenue Code is not available to individual CFC shareholders. As a result, individual CFC taxpayers are subject to tax on a GILTI inclusion at federal rates of up to 37 percent.

In order to reduce the sting of a GILTI inclusion, an individual CFC shareholder may contribute his or her shares to C corporation. This would result in the C corporation becoming a U.S. shareholder of the CFC. The short-term benefits of this strategy are clear. The contribution, when structured properly, should qualify as a tax-free Section 351 contribution. (Shareholders in an incorporation transaction will not recognize any gain or loss on the exchange if they satisfy three requirements of Internal Revenue Code Section 351(a)). First, there must be a contribution of property. Second, the contribution must be solely in exchange for stock and, third, the contributors must control the corporation immediately after the exchange).

GILTI earned by a C domestic corporation should receive the benefits of the Section 250 deduction and flow-through of foreign tax credits. In addition, a distribution of the CFC’s previously taxed earnings and profits (“PTEP”) should not be subject to further U.S. federal tax. Moreover, if the CFC has any E&P (that is not otherwise PTEP) a distribution of such an amount from the CFC to a domestic corporation may qualify for the Section 245A participation exemption. Internal Revenue Code Section 245A allows an exemption for certain foreign income of a domestic C corporation that is a U.S. shareholder by means of a 100 percent dividends received deduction for the foreign-source portion of the dividends. Proper planning may also result in dividend distributions from the C corporate holding company qualifying for reduced qualified dividend rate of 20 percent (plus medicare, state, and local taxes).

However, anyone considering transferring CFC shares into a domestic C corporate holding company must understand there are significant long term costs. First, typically, if an individual were to sell CFC shares, the gain on such sale would likely be classified as long-term capital gain for federal tax purposes. Long-term capital gains are subject to federal income tax at a preferential 20 percent rate. To the extent that the CFC has E&P, then some or all of this gain may be recharacterized as a dividend under Section 1248. Under Section 1248(a) of the Internal Revenue Code, gain recognized on a U.S. shareholder’s disposition of stock in a CFC is treated as dividends to the extent of relevant E&P accumulated while the person held the stock. With respect to individual U.S. shareholders who sell shares of a C corporation holding CFC shares, recharacterization is significant due to the rate differential between long-term capital gains, (maximum 20 percent) and ordinary income (maximum 37 percent).

With a Section 338(g) election, the domestic seller also will be taxed on the gain from the sale of the CFC stock, with the basis of such stock being increased to account for any inclusions under Subpart F or GILTI for the year (including the Subpart F and GILTI income generated by the deemed asset sale). Subject to holding period requirements, the stock gain will be recharacterized as a dividend under Section 1248 and generally will be deductible under Section 245A to the extent of the CFC’s prior year untaxed earnings and profits and current year earnings that are not Subpart F income or tested income, as well as earnings arising from gain on deemed sale of assets that are not subject to Subpart F or GILTI. Because of the dividends received under Section 245A, there may be a preference for C corporate sellers toward dividend characterization under Section 1248 (i.e., a stock sale), which may be exempt from U.S. tax under Section 245A, as compared to gain that may be classified as GILTI income (i.e., an asset sale), which would trigger a 10.5 percent corporate tax. However, if sufficient E&P exists, corporate sellers will likely prefer stock sales over asset sales. In this case, utilizing a Section 338(g) election will convert gains to GILTI tax which will be taxed 10.5 percent.

The liquidation or distribution of the sale proceeds of CFC would be subject to an additional tax at the shareholder level. As discussed above, this may be reduced to 20 percent for federal income tax purposes. A word of caution when using C corporate structure to hold CFC shares. Some holding corporations are developed to avoid shareholder level tax by simply failing to make corporate distributions. In these cases, the Internal Revenue Service (“IRS”) may assess penalty taxes under the provisions of the accumulated earnings tax and the personal holdings company tax.

The accumulated earnings penalty tax is imposed upon corporations “availed of for the purpose of avoiding the income tax with respect to its shareholders…by permitting earnings and profits to accumulate instead of being divided or distributed.” See IRC Section 532(a). Once the IRS determines that a corporation is subject to the accumulated earnings penalty tax, a tax imposed upon “accumulated taxable income” at the 37 percent top marginal tax rate imposed on individuals. See IRC Sections 532, 535. Under the personal holding company tax provisions of the Internal Revenue Code, a penalty tax is imposed upon undistributed personal holding company at the top individual marginal tax rate of 37 percent. See IRC Section 541.

Contributing CFC Shares to a Partnership or S Corporation

There is no one size fits all solution when it comes to GILTI planning.Careful modeling should be done by a qualified international tax attorney prior to proceeding with a GILTI tax reduction plan.